Wild Life Clubs of Malawi in Mulanje organized an open day on 8th March 2014 at Mulanje Park  where some of the activities included football, netball, egg- on– spoon race, three legged race, poems, drama and many others. FOMO Independent Secondary School was among four schools that attended the ceremony. The schools that attended were Mulanje Mission CDSS, Mulanje  Boma CDSS, Robert Private Secondary and FOMO Independent Secondary School. FOMO played with Robert in both football and netball. FOMO lost by one goal to nil in football and FISS  netball also lost 3 to 6 in favour of Robert and Mulanje Mission CDSS played with Mulanje Boma CDSS. Mulanje CDSS won by two goals to nil. In the finals, Robert played with Mulanje Boma and Mulanje Boma CDSS won the first position after beating Robert by two goals to zero. In netball, Robert Private won the first position after beating Mulanje Boma CDSS. FISS managed to grab second position in both three-legged race and egg-on-spoon race.

Speaking on behalf of the staff of FOMO Independent Secondary School, Jimmy Makande thanked Wild Life Clubs of Malawi for organizing the open day. He said that this function would encourage members of Wild Life clubs in schools to work hard in order to conserve the environment.

Oscar Kanje, leader of delegation of the volunteers of Wild Life Clubs of Malawi, on behalf of the organizers thanked all the participants who took part in the function. Catherine and Timothy represented the prizes to the winning teams. 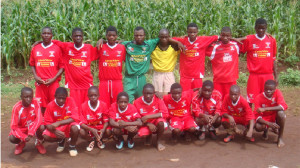 The first teams both football and netball  were given watering can, slasher and a hoe. Other teams got exercise books and pens for taking part in the function. 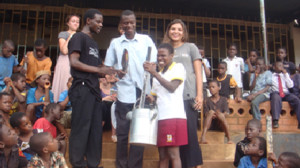 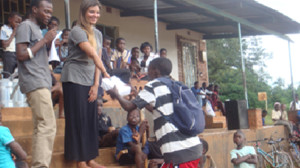 Grivin Macheso, FISS student receiving prize for participating in the activities during the open day.

Lives can be changed, but we do need YOU to help

Even a small gift to help may seem too little, but to them it’s means everything.