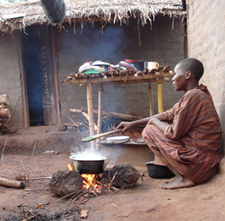 Introduction: With no access to electricity or gas and the rising cost and scarcity of solid fuel, (wood) in both the semi urban and rural areas we need to consider a number of alternatives to meet the growing need for fuel for cooking and water heating.

The normal way of heating in these areas is done outside using wood on an open fire; wood is supplemented by dried maize husks following the harvest. Depending on the level of income in the house hold charcoal burner are also used inside during the wet season. 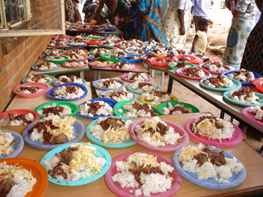 Range of Foods: The basic diet of the rural population consists of Sima, (Maize porridge or paste), ground and root vegetables, ground nuts, (Peanuts) seasonal fruit including sugar cane also termites, mice and small mammals when the opportunity arises. As we move up the scale, rice, bread, beans, chick peas, eggs, sugar and small fish are added. There is then quite a jump before livestock meats are part of their diet, chicken and goats being the main ones, rabbits and pigeons are less common, beef is normally only found in the built up areas. Dairy products including milk are virtually non existent in their diet, though some dried milk products are available. Water and tea are the principle drinks, but may be supplemented with various local brews both alcoholic and non alcoholic on special occasions, either sorghum or maize based. Ovens and grilles are virtually unheard of; most things are boiled or fried.

Local Enterprise: There are a number of small scale home based production enterprises making Mandasi, (Drop scones) and roasted peanuts for sale. 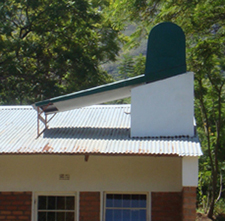 Limitations: Due to the type cooking and meal times, the main meals being breakfast and early evening, (It gets dark around six pm) the use of solar cookers and ovens may have limited application during the dry season, but I have seen no instances of their use. Due to relative expense of solar heaters, wind turbines and solar panels these are not used in the home, but a number of NGO’s and government facilities use solar water heaters. Note it is generally felt that there is insufficient wind to justify windmills or turbines. We must also exclude the use of Bricquettes made from paper or other fibres as there is little or no access to the raw materials and what limited production there is in the towns means the finished product is too expensive to be considered for rural areas.

Basic Concept: Rocket stoves seem to be the next logical step, but even though the technology has been known for over a hundred years the basic principles seem to have passed Malawi by.

Rocket stoves are potentially many times more efficient than burning wood in an open hearth and also have the added benefit of burning with virtually no smoke. One of the hazards of burning on an open fire is smoke inhalation which causes health hazards. Some minor disadvantages of the rocket stoves are the wood has to be very dry and slender, some additional work is required to obtain the correct wood size and a dry storage area is required. 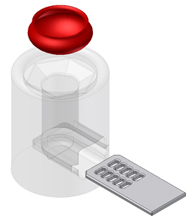 Simplest Design: The simplest design of a stove is an elbowed tube, with a raised platform for the fire. The pot is in the flow of heat being generated from the fire. The lining of the tube, (fire box) is normally of heat resistant material, (Fire brick) to raise the temperature in the heating zone and retard the heat transfer into the body of the stove which may be made of an assortment of materials. The locally commercially produced rocket stoves are made of steel which with the lining degrade due to the heat and rust over about 3 years which render the stove unusable.

Information Resources: Many stove designs can be found on the web, but most of them require expensive, (valuable) materials such as tin cans, fire bricks metal sheeting and gauze all of which are available, but are out of reach of most of the rural community. The challenge is to produce a design that uses local materials and can be reproduced on a semi commercial basis. There are also on the web stove designs that use nothing more than mud and these work very well but don’t lend themselves to being produced semi commercially.

Cooking Pots: If we first look at the cooking pot, there are many types and sizes but the most commonly used are traditionally made clay pots or commercially produced metal pots. Note even at the three stones and open fire level the situation for slow cooking/boiling could be improved at a stroke by providing lids for the pots. The most common size of pot used is 265 mm diameter, (May vary slightly depending on local producer) which is approximately the same size as a large pot normally found in the UK kitchen. Larger pots are used for boiling water, but are not as common. A traditionally made pot is approx. £2 / $4 / 3 Euro and is made locally in the village. As this is a relatively skilled job a single potter will cover a large area and therefore the pot sizes remain fairly constant. 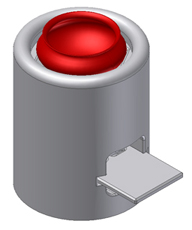 Other: There are some commercially produced rocket stoves, but the cost is out of reach to all but NGO’s and Government organisations. A large stove 600 mm pot diameter can cost more than the average wage for a year. Each FOMO centres caters for 300 to 400 hundred children daily and to meet this need we have purchased stoves for most of the centres and though there was some resistance to their use at first, (Very dry wood is vital) everyone quickly saw the benefit of the stoves.

Materials: If we consider the materials for the stove we need some insulation material, and have a number of choices. A mixture of charcoal (85%) or sawdust (50%) and the remainder clay are the most common, but we can also use pumice, vermiculite and a number of other materials. We can rule out sawdust, (see note), vermiculite and pumice as they are not available in sufficient quantities. Charcoal works well but it has to be produced at a cost, so we need to explore other alternatives. At this point in time am not sure what they are, but a good candidate is the waste shells resulting from dehusking the maize and rice. For the outer casing various fillers have been used including rock, concrete, clay or in the case of old cast-iron stoves, water jackets for general heating. There is an abundance of free clay; the best type is from termite mounds as it has already been sieved. Specialist clays can be sourced in Malawi, but again cost would be a major factor. 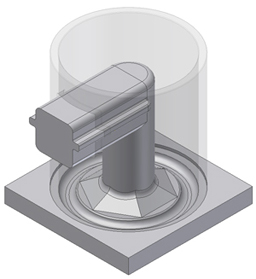 Note: It may be better to use sawdust (50%) / clay (50%) for the plate as it would produce a more consistent product.

Stove Production: Clay working skills, use of moulds and clay firing are quite wide spread in Malawi as can be seen from the number of locally made baked bricks and pots. The idea is to create a stove design that will capitalize on the existing skills and knowledge using virtually free construction materials. The greatest cost would be in the firing of the insulation material and labour.

Specifications: The specifications for the stove in terms of size and air flow can be gleaned from a wealth of sites on the web. I have included one such example as part of the documentation, though as the author points out after extensive calculations, if there is insufficient air flow then raise the pot a bit. That sort of flexibility we can cope with.

The hexagon shape is to allow for varying sizes of pot and it also caters for both flat and traditionally curved bottom pots.

My design is based on having a central mould and coating it with a layer of insulting material. A charcoal/clay mix will be used first, but further experimentation will be done later to add flexibility. The container, (body) will be back filled with termite clay. The whole stove will be sun dried and baked in a pit kiln or placed within a brick stack for firing. 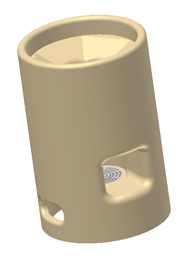 Variations: To cater for the drop scone production and frying a raised metal plate may be laid on top of the stove and though this is a luxury, scones are normally made for sale.

The Goal: FOMO will produce stoves for sale to assist FOMO to meet its on going commitment to the children of Mulanje. It is hoped that each stove will cost no more than £5 / $10 / 8 Euro. A number of stoves will be given away free to the small number of FOMO children, (89) that live on their own. The 13 FOMO centres will also use the stoves for general cooking and for demonstration purposes.

Together Helping Does Make a Difference